Bally's Corporation (BALY) is the old Twin River Worldwide Holdings (old ticker, TRWH) that began with two casinos in Rhode Island, then really starting in 2019 through an aggressive series of complicated acquisitions created a sprawling omni-channel gaming company that appears well positioned to benefit from the long term growth in iCasino and online sports betting.  The architect of this transformation is Soo Kim of Standard General, he is the Chairman of the Board and his investment firm owns more than 20% of the shares.  On 1/25/22, Standard General submitted a non-binding offer to buy Bally's for $38 per share (shares trade for $35-$36).

The offer appears very opportunistic as the economy is reopening, the pieces of Bally's serial acquisitions are starting to come together but before their true earnings power are fully apparent, all while the market has sold off gaming stocks.  Likely Kim is simply highlighting the shares are cheap, he's best positioned to understand the value of the company, and nothing further comes to fruition on the management buyout front.  However, now that the acquisition strategy is maturing and the need for a public currency might not be as important, he could actually want to take it private and negotiate a higher price with the board.  But at current prices, I agree shares are cheap and would be happy to own the stock absent a deal.

Here's a slide from their investor presentation showing the pace of acquisitions, almost all of the regional casinos were acquired in 2019-2020, many the result of forced divestures when larger gaming peers consolidated.  This allowed Bally's to pick properties up on the cheap and build a nationwide footprint in which to standup a mobile gaming presence.  I generally prefer the regional casinos to destination ones as they're more stable and proved that throughout covid.  Bally's Corp bought the "Bally's" brand name from Caesars (CZR), they're in the process of rebranding all of their regional casinos to the Bally's brand, the old CZR's owned Bally's in Las Vegas (the original MGM Grand) is being rebranded to a Horseshoe property (and Bally's Corp is buying the Tropicana Las Vegas from GLPI).

The two non-physical casinos deals really worth calling out are:
Interestingly, the CEO of Gamesys became the CEO of Bally's, signaling an emphasis on bringing the successful Gamesys model to the United States.  Also, the management of Gamesys elected to take stock in the merger instead of cash, at current prices that appears to be a mistake as the value of those shares is roughly half what the cash offer was a few months ago, but shows their confidence in being able to replicate their success here.
Valuing Bally's is a little tricky, it was a covid beneficiary but hard to tell how much (margins will come in as service levels are restored to pre-covid levels), the capital structure is messy due to their acquisitions and the net leases on some of their physical casinos, and we've yet to see the inflection point in their omni-channel strategy.  All reasons why Soo Kim is probably best positioned to value the company versus outside investors.  Here's Kim explaining his offer on CNBC.
Below are all the contingent equity securities that have been issued in conjunction with various acquisitions over the last two years (note the Gamesys acquisition shares are in the share count today, the others generally aren't in reported numbers): 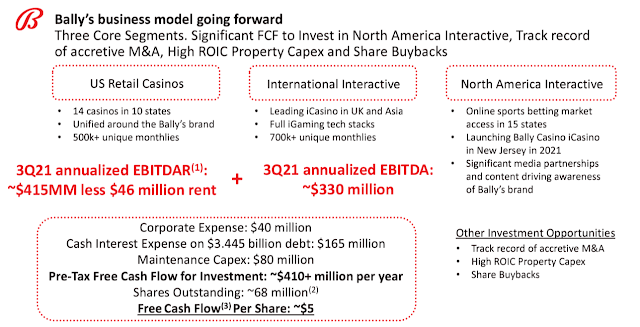 And to show possibly more normalized numbers, here are what the Bally's regional casinos did in 2019: 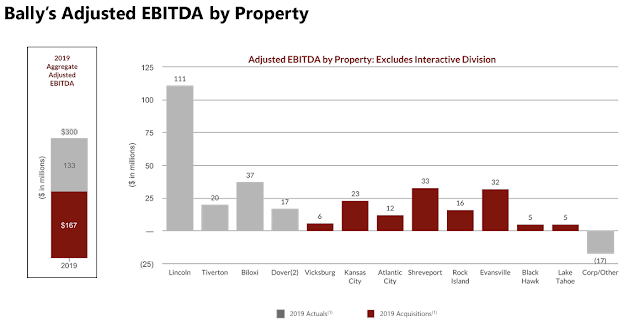 If we back out the corporate expense on the above for an apples to apples with the Q3 numbers, we get $317MM versus the $359MM (post rent) done in Q3, for simplicity, let's just say normalized is somewhere in between there, an average would be $343MM.  Add Gamesys (pretty consistent grower over time) and subtract the corporate expense gets us $633 of EBITDA against a $5.9B EV (using 68 million shares, $3.445B of debt excluding capitalized leases) for an 9.4x EBITDA multiple (or a 14% levered FCF yield using management's estimate) that gives no value to the mobile app opportunity in the U.S. (currently loss making).  Again, there are a lot of moving parts, I could be wrong, please double check, but I think that's a pretty reasonable price to pay for a company that is potentially in play and/or at an inflection point in their business model.

Disclosure: I own shares of BALY
Posted by MDC at 6:17 PM

Email ThisBlogThis!Share to TwitterShare to FacebookShare to Pinterest
Labels: Bally's