Computer Sciences Corporation (CSC) is primarily an IT services firm that is spinning off its U.S. government services business (targeted by the end of November) and immediately merging the spinoff with SRA International which is another contractor in an industry that's seen a lot of spinoffs and consolidation activity.  The spinoff will be recapitalized and paying out a special dividend to shareholders (versus the typical scenario where the spinoff dividend goes to the parent) of $10.50 per share.  There's been a lot of takeover speculation regarding both the parent and spinoff, that along with the dividend to shareholders leads me to believe the parent might be sold thus completing a breakup of the company.

Overview
CSC was founded in 1959 and today it is a $9B market cap global IT services company, they partner with various hardware/software providers (including some in-house) to provide clients with customized outsourcing and IT solutions.  This is a highly competitive business, CSC is in the midst of a turnaround similar to competitors IBM, HP, Xerox, among others.  Revenues continue to fall at a double digit pace and have each year since 2012 as the company changes their mix and moves towards the hot buzzwords - big data, cloud computing and cyber security. The company does have rocky recent past highlighted by the nearly $200MM fine the SEC imposed on them in June (that really muddies up backward looking earnings) for accounting fraud charges as the former management inflated earnings starting in 2011 and generally hid a troubled contract with the U.K's National Health Service.  In early 2012, Michael Lawrie joined the board and became CEO replacing disgraced management, he has both an IT services background (Misys PLC, IBM) and was also briefly a managing director at the hedge fund ValueAct.

CSC reports in three segments, each contribute roughly the same amount of revenue:

Global Business Services is the consulting and services piece of the business, it has respectable 10% operating margins; Global Infrastructure Services provides data center management, cloud, infrastructure as a service type offerings, its more product/hardware intensive and has the lowest operating margins of the three at 6%; North American Public Sector is the U.S. government contractor business, almost entirely IT services offerings and has the highest operating margin at 14%.  There's been speculation that the company has been looking to sell itself; In September 2014, Bloomberg reported that CSC had contacted private-equity firms to gauge interest in an LBO and then this past February DealReporter said CSC is in talks to sell itself in a two-part deal to a foreign strategic buyer and a private equity firm.  It seems like the two-part deal might be in play as in May, the company announced plans to spinoff the North American Public Sector unit as Computer Sciences Government Services (many government contracts have restrictions against foreign contractors), leaving the two commercial/international business behind to potentially be taken out.

Computer Sciences GS + SRA
I tend to like government services businesses, they have low capital requirements, fairly consistent and predictable revenues as once you win a contract it's hard to be unseated as the incumbent.  As a service provider, most of their expenses are personnel and many government contractor personnel are more tied to the individual contract versus the actual employer.  If you lose a contract rebid, the staff either gets reassigned, moved to the new contractor, or are laid off.  So given the predictable revenue steam and low capital requirements, the business can sustain a high debt load and use the free cash flow to delever, ultimately accruing more value to shareholders.

Along with the spinoff, CSC is immediately merging their government services business with competitor SRA International which is owned by private equity and management.  I like these multi-step spinoff and merger transactions (think ATK/ORB and SSP/JRN) as it shows a little more foresight and thoughtfulness to the corporate action, rather than just doing a "garbage barge" spinoff, management is putting together a company that's setup to succeed. 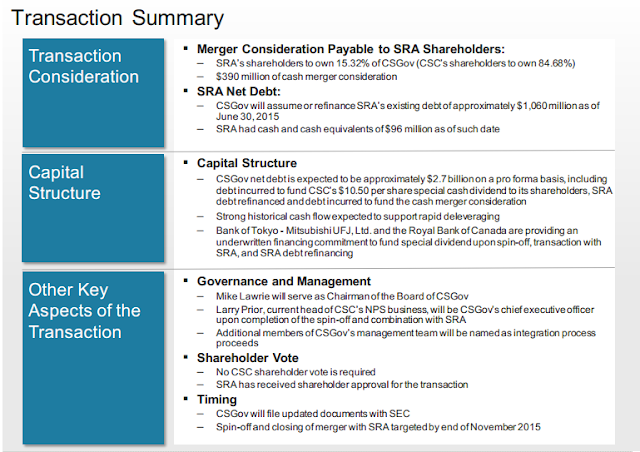 Notably the spinoff is assuming SRA's debt adding even more leverage to the company, although still at reasonable 3.75-4x EBITDA levels.  The company will be roughly split 50-50 between defense/intelligence contracts and civil agencies, SRA's book of business is a little more diversified than legacy CSC further reducing concentration risk to losing any one large contract.  When announcing the SRA merger, management provided some expense synergy and EBITDA numbers for the combined entity along with some easy public comparables of very similar businesses. 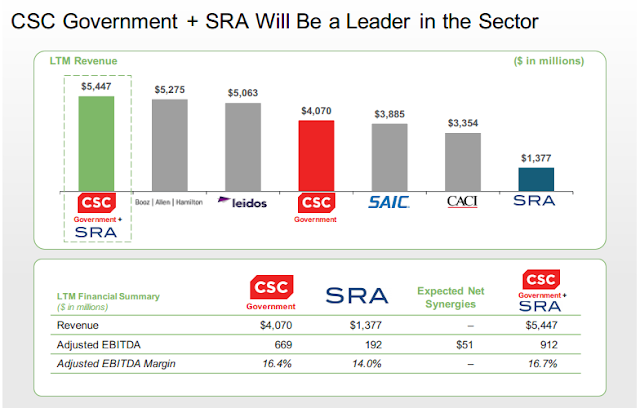 CSC Government Services will have $2.7B in net debt, plus they're taking the $400MM pension liability with them in the spinoff, for a total adjusted net debt of $3.1B.  For EBITDA, I'm taking out the expected synergies for now and using proxy/estimates swags for earnings and FCF.  Their competitors are all of relative similar size, similar debt levels, and trade within a tight range of 9.5-11x EBITDA.

Sorry if that's a bit small, but I wanted to try and show the industry's valuation using a series of multiples and give a fairly conservative valuation to CSC Government Services, using a 9.5x EBITDA value I'm coming up with a market cap for the spinoff at $5.08B.  Current CSC shareholders are going to own 84.68% of the spinoff, so net to CSC shareholders the spinoff should be worth approximately $30.55 per share, add in the $10.50 special dividend for a total of $41.05 per share in value.

Computer Sciences Commercial Business
I feel pretty comfortable valuing the government services business, much less so with the remaining commercial business, but if you net out the government business using the above comparables, the remaining parent looks very cheap despite the industry headwinds.  The purple row in the table below is showing just that, netting out the $41.05 and holding the current price constant at $64.62 (went up more today) the stub is trading at: 9.1 P/E, 3x EBITDA, and a 14% FCF yield, all very cheap metrics that would be enticing to any potential financial or strategic buyer.

In yellow, I put the remaining CSC at 6x EBITDA and come up with a $7B market cap, or $50.09 per share, in purple (netting GS out of the current price) it's $23.57 per share, so a lot of the value creation could come from this gap closing.  In the meantime, CSC continues to make bolt-on acquisitions (UXC Limited, Furition Partners, Fixnetix) in the commercial business as they continue to move towards higher margin offerings.  The company will be hosting an investor day on November 5th, hopefully they provide a little more clarity on what the plans are for the remaining business, but at today's prices I think you're paying a cheap price for a fair business that's likely an acquisition target.  Sum of the parts gets me to $91.14 pre-spin for a ~40% upside, although I'll probably sell for something close to $80 per share.

Disclosure: I own shares of CSC
Posted by MDC at 3:03 PM