Alliance Data Systems (ADS), after a few years of speculation, is spinning off their LoyaltyOne segment as Loyalty Ventures (LYLT) in an attempt to become a more pure-play private label credit card company.  The spinoff's primary business (~80% of  EBITDA) is the Canadian loyalty program "AIR MILES" where consumers ("collectors" in LYLT speak) shop at participating retailers ("sponsors") and earn points that can be redeemed for travel, cash/gift cards or other rewards.  AIR MILES collects a fee from sponsors at the time of purchase but only recognizes revenue fully when the collector redeems the reward, creating an attractive negative net working capital business.
AIR MILES is similar to the old Blue Chip Stamps business that was a Warren Buffett favorite from a generation ago. AIR MILES is an independent rewards program, it is not formally connected to an airline or hotel chain which is common in the U.S., instead they partner with retailers offering rewards on everyday recurring consumer purchases like groceries and gas. The other business under the Loyalty Ventures corporate umbrella is "BrandLoyalty", it is more of a targeted short-term promotional business that primarily caters to grocery store chains globally. I haven't seen their promotions at any grocery stores I frequent, but the campaigns BrandLoyalty runs seem analogous to the Monopoly game promotion McDonalds occasionally does to generate a short-term bump in sales.  It doesn't appear to have the same float dynamics and its results are rather lumpy.
The spinoff setup reminds me a bit of the recent one from J2 Global, Consensus Cloud Solutions (CCSI), an historically underinvested yet steady cash flowing business the parent had harvested cash from to pursue M&A in other segments.  While I continue to have my doubts about Consensus (the market clearly doesn't share my view) not being a melting ice cube, Loyalty Ventures should be a low-single digit revenue grower inline with GDP.  It is not an exciting growth story but it will produce plenty of cash that now instead of sending up to ADS corporate, can be used to deleverage (starting off with ~3x net debt), invest in the business or return to LYLT's own shareholders (no plans for a dividend).
This is a business with some baggage and requires a little leap of faith to assume it will get back to its normalized earnings.  Back in 2016, the AIR MILES segment made a pretty terrible public relations blunder (here's a local news story on it), they had previously quietly added a 5 year expiration date in 2011 to their reward miles, all historically issued miles would then at year-end 2016 unless they were redeemed.  Due to the revenue recognition dynamics, this created a windfall in 2016 as collectors rushed to redeem their miles or have them expire, either outcome is generally good for the company's financials.  But people don't like the rules changed mid-game and AIR MILES faced significant backlash (they also reportedly didn't have enough rewards/merchandise to meet demand), eventually it became a legislative issue and the company caved to pressure a month before the deadline, removing the expiration feature from the program.  The miles once again never expire, but many long time collectors redeemed their miles for unwanted rewards just to risk not losing them and they weren't allowed to return their rewards after the expiration policy was reversed.  Naturally if you had been saving miles for a dream vacation for a decade and instead had to redeem for a fancy vacuum, you'd be upset.  Management in charge during this time have since moved on, it is not the same team that will be in charge of the spin.
The AIR MILES segment was just about back to normal when covid hit which reduced the appeal of a travel awards program and due to travel restrictions, mile redemptions (and thus revenue/earnings) dropped significantly in 2020 and 2021.  In Q2 2021 business is potentially inflecting, miles created is up (+8%) and redemptions (+32%) are following, albeit against an easy comparable Q2 2020.  The company is anticipating $187MM in adjusted EBITDA in 2021, but a normalized number is probably something closer to $200-210MM, this is something of a leisure travel recovery story.

There is not a great public peer for Loyalty Ventures currently public, Aimia previously owned Aeroplan (spun from Air Canada and repurchased by the airline a couple years back for $370+MM) and AeroMexico's loyalty plan that was sold for 9x EBITDA.  The U.S. airline carriers used their loyalty programs as collateral to raise financing for themselves last year, for example United raised financing with a 12x EBITDA multiple valuation on their rewards program.  Probably not apples-to-apples.  I have no clue where LYLT will trade, but I'm going to throw a 9x multiple on it as a guess. 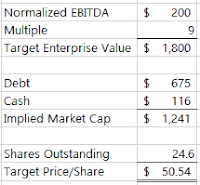 When issued trading was supposed to start today under the symbol LYLTV but I didn't see any trades, regular way trading is set for 11/8.  As always, I'm very open to hearing from those more knowledgeable about the situation, especially those more comfortable with the accounting and piecing out the true cash flow of this business.
Other thoughts/notes:
Disclosure: I have a tiny position in ADS $100 Jan 2022 calls, basically just a FOMO trade in case LYLT takes off out of the gate similarly to CCSI (seems like one of those situations where both parent and spin will trade up), look to add LYLT directly once it starts trading.
Posted by MDC at 6:45 PM